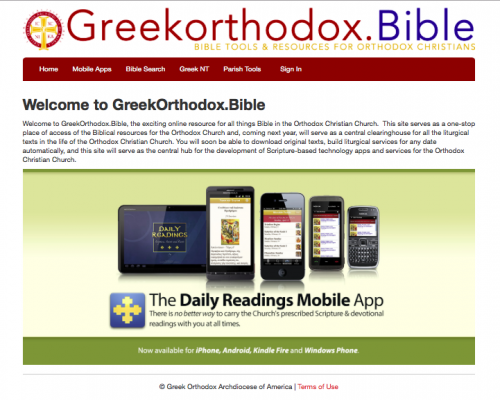 GreekOrthodox.Bible serves as the central hub for the development of multi–lingual, Scripture-based technology services; mobile apps; and Biblical resources for the Orthodox Christian Church worldwide. GreekOrthodox.Bible is being expanded to serve as a central clearinghouse for Liturgical texts and prayers in the life of the Orthodox Christian Church—all of which are deeply rooted in the Scriptures. Visitors will also have the ability to build and download Liturgical services automatically for any given date.

GreekOrthodox.Bible is the culmination of nearly two decades’ work by the Department of Internet Ministries, which originally began as an initiative to digitize the Typicon of the Ecumenical Patriarchate in 1997. The result of this initiative, now known as the Online Chapel Digital Engine, has served as the foundation for many of the Archdiocese’s most popular offerings over the past 17 years such as the Online Chapel on goarch.org, Bulletin Builder, and the Daily Readings mobile app.

Read more about How GreekOrthodox.Bible and Septuagint.Bible are serving the Orthodox Christian Church.

Watch this short video with Theo Nicolakis (Chief Information Officer, Greek Orthodox Archdiocese of America) describing the importance and significance of the .BIBLE Top-Level Domain as: “the best way to show the Bible is central to what you do as an organization and ministry. It’s how you can enter the 21st century and take Scripture engagement into a whole new level.”

Also, read this endorsement for the .bible top-level domain from The Very Rev. Archimandrite Dr. Nathanael Symeonides, Director of Inter-Orthodox, Ecumenical, and Interfaith Relations of the Greek Orthodox Archdiocese of America.