Idea #10: What about Sharing the Whole Bible on Twitter?

Twitter has become a fertile digital space for creativity since its launch in March 2006. The convention of using @ with a Twitter handle for replies and mentions emerged over a year later; and the convention of using # for hashtags as a label for topics of twitter conversations didn’t become official until 2009. What started as short updates about what someone is doing, Twitter is now like a global town square to share ideas and information instantly.

What about the Bible? What could be done with the Bible in a 140-character text update on Twitter? Many people have found this limited space to be just enough to share a Bible verse or two. So many tweets were sharing Bible verses that Stephen Smith systematically researched this. In a Bible Tech 2010 presentation on Tweeting the Bible, he tracked these statistics from April 2009 to February 2010: 2,292,836 tweets from 340,564 authors citing 16,580,449 verses. He also visually plotted the popularity of Bible chapters and verses on Twitter: 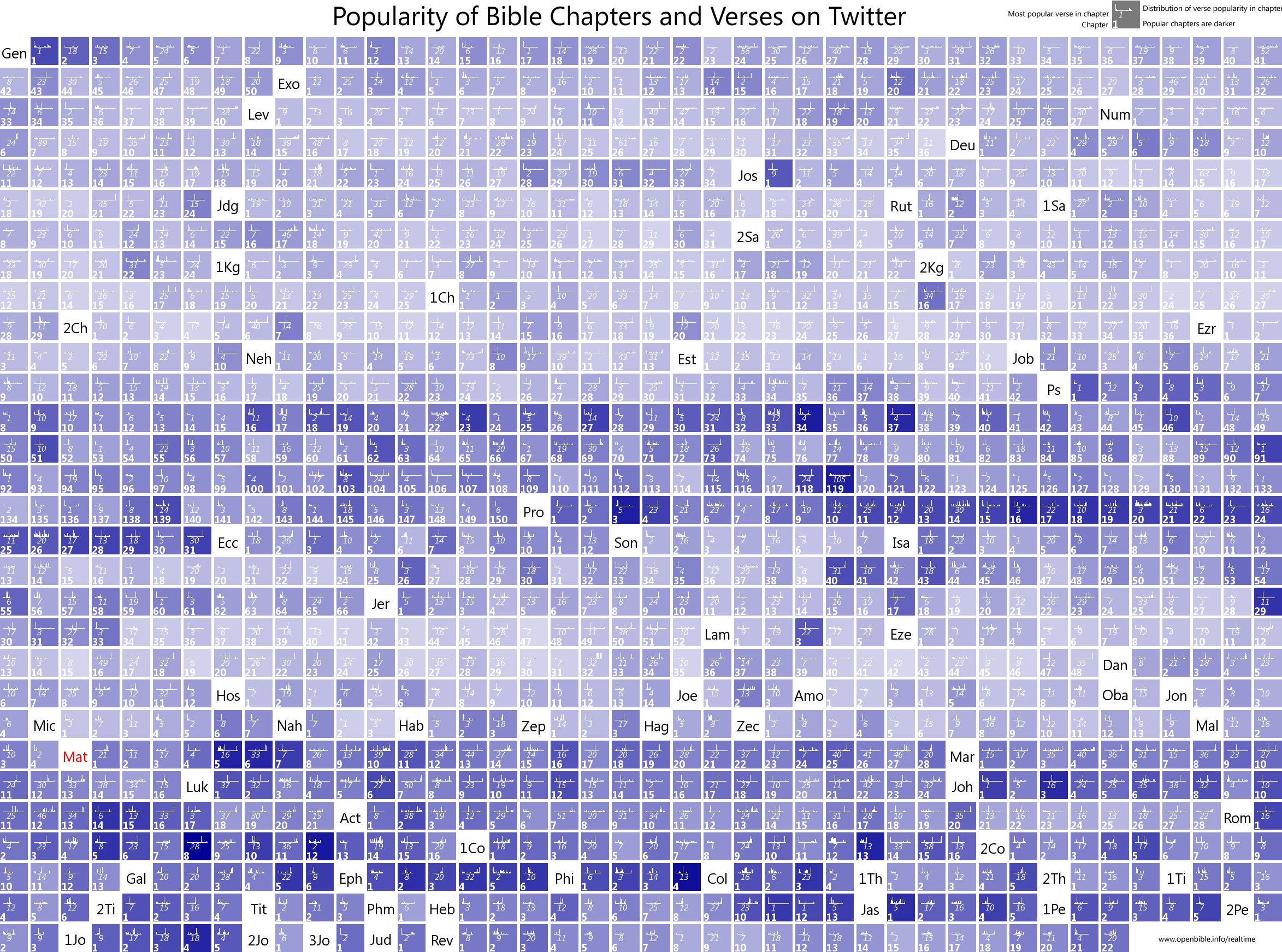 Millions of people have sharing a Bible verse in a tweet. There are a few people who have shared the whole Bible on Twitter. Here’s a couple of projects that did this:

Jana Riess (@janariess) authored a book titled “The Twible: All the Chapters of the Bible in 140 Characters or Less . . . Now with 68% More Humor!” to present a tweet for each and every Bible chapter in printed form.

@BibleSummary = Chris Juby (@chrisjuby) summarised (this is the UK spelling for “summarized”) the Bible on Twitter between Aug 2010 and Nov 2013 - one tweet per chapter, one chapter per day. He blogged about it at biblesummary.info. Now he has a new project underway at @BibleIntro, described as: “Notes, thoughts and questions as I write ‘a Bible handbook for the Twitter generation’.”

Traditional media picked up on these projects in these mentions:

There are a couple of other ways the Bible and Twitter have inspired creativity:

Twitter Account Will Post a Bible Verse Every Day for 86 Years (Mashable, December 2011) mentions @TweetTheBible, an ambitious project that will consecutively tweet every Bible verse in the whole Bible. At the rate of one verse a day, it will take 86 years, or 2097, since it started in November 2011.

... the compilation of tweets by more than 3,000 Christians who participated in the church project earlier this year. In honor of the Pentecost holiday, they used the micro-blogging service Twitter to summarize 3,906 Bible sections into 140 character messages, according to Berlin-based newspaper “The Local.” Though the project was scheduled for May 20-30, it was completed 37 hours ahead of schedule and achieved a world record.

Every new innovation opens the way to many new opportunities and creative possibilities. What creativity will the advent of .BIBLE domain names spark in you?