Idea #22: How the Bible Makes for a Great Video Game

Gaming and video gaming have become a prominent part of our world today. “Video games have become quite popular over the last 30 years, so popular in fact that that fully 65% of American households play video games and this number is growing.” (OnlineEducation.net) and “... more than half a billion people worldwide playing computer and video games at least an hour a day.” (Jane McGonigal)

Just as the Bible has a powerful influence for all of human history and civilization, what would it look like for the world of the Bible to be incarnated into the video gaming world? The game developers nicknamed Tornado Twins (Ruben & Efraim Meulenberg) are taking on the challenge of bringing these two worlds together, launching a successful KickStarter crowdfunding campaign for The Game Bible Series: David. Here’s their explanation of what they’re doing:

Our names are Ruben and Efraim Meulenberg (yes, we’re twins :- ) We’ve been in ministry for about 15 years, working with kids, teenagers and adults in some of the largest churches in the US and Europe. We’ve noticed one thing that you will likely have noticed as well.

When reading goes down, so does Bible-reading

Over the last decades, reading has gone down tremendously. This also includes reading the Bible, as shown in a recent report by Lifeway. Reading has plummeted most amongst teenagers and kids, making it extra hard for churches like yours and ours, to get the next generation into the Bible.

If reading is going down, then what’s going up?

Most people suspect that all ages feel more drawn to interactive media then to the written word. And the numbers reflect this. Gaming is the absolute winner, being the only entertainment industry that’s still growing - and rapidly so - in today’s economy. The average gamer is not 15… he or she is 35. There are more female gamers over 18 then male games under 18. Every American household has 2 gamers… and they’re not just the kids. If you thought that your youth ministry is full of gamers, you are right… but your “big church” has more!

We found that both youth and adults will read the Bible eagerly if they are internally motivated. The Holy Spirit draws people, but we are called to spread the word. Jesus always started where people are. So if people are actively engaged in their gaming devices, then why don’t we start there?

Media isn’t the enemy. It’s part of the solution.

Time and again, media has proven to help people read. When a popular movie comes out, people start reading the books. We are not in a world where media replaces reading. We’re in a world where media tells people what would be great to read. Media is like a messenger, it reaches the people before a book does. For this reason, we helped LifeChurch.tv last year to design their “Kids Bible App”. It had millions of downloads already in the first week. But what’s available for older kids? Teenagers? College students? Adults? Sadly, most Christian games are cheesy, if they exist at all.

Star Wars, Lego, and the Bible

After training 40,000 game developers, God placed us in a position to make a difference. Five years ago, we gathered top developers (who worked on Star Wars, Lego and more) to turn the Bible into a series of high quality videogames. Much like the TV series “The Bible”, it takes gamers through the Bible from start to finish, raising their interest in God’s word. As we’re testing the game, we’re noticing that

Equipping the church with cutting-edge media Church and ministry has traditionally been great at providing people with books and curriculum. We’re entering an age where we’re learning to also be good at film, music and eventually games. The Game Bible is the first High Quality game made to help churches in their mission. It’s the first game of the BIble that’s widely praised by both Christian and secular journalists. We’re developing unlock codes so that youth- and children’s ministries can provide the game as prizes, and so they can have kids play the same story at home, as they just talked about at church. 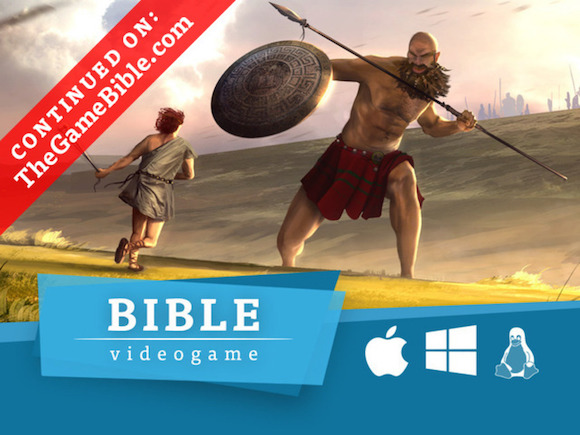 The Game Bible website summarized their vision this way: “The goal is to create a cutting-edge gameplay experience that will make you experience the stories of the Bible in a completely new way.” And they’ve made progress in the game’s development. There is a very rough beta preview of The Game Bible: David, Episode 1. No doubt this effort will take a lot of skills, a lot of faith, and a lot of supporters. Take a look at the back story and see the developing saga. What do you think?

Creating a video game based on the Bible is very challenging for many reasons, as explained in articles like "Why Are There No Good Bible Games?" (Chris Totten @ videogamewriters.com, cached) and Why Are Bible Games Never Very Good? (Eddie Makuch @ Gamespot.com); very encouraging to see two able and gifted guys who love the Bible and video gaming bring it all together! In other words, what makes for a great video game? A great story, and there’s no greater story than the Bible.