Idea #32: One Bible with Many Churches, Denominations and Sects

The Word of God has been preserved for almost 2,000 years in the Christian Scriptures known as the Bible. Over the course of church history, that one book has resulted in thousands of denominations and sects.

How can one book have so many different interpretations and applications?

That could be perceived as confusing and confounding or it can be received as an amazing mystery of the power of the Scriptures to inspire humanity. This variety of faith traditions and expressions of Christianity have notable historical roots, as illustrated in this “family tree” diagram: 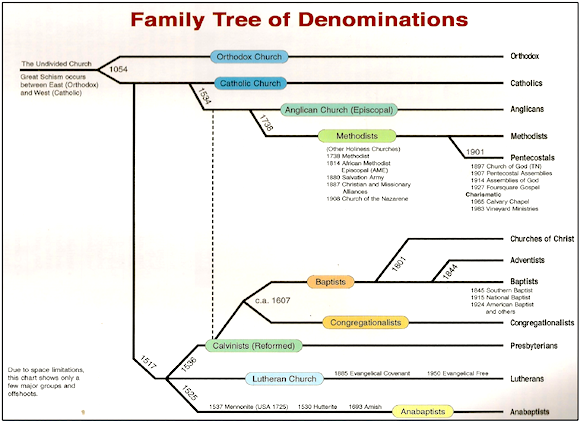 So why are there so many Christian denominations?

For starters, let’s not forget that denominations are made up of churches, which are made up of people, who often just do not get along. Like everyone else, Christians struggle with pride, selfishness, stubbornness, the desire to wield power, and hypocrisy, so they sometimes respond to their disagreements poorly.

Beyond all that, Christians sometimes have legitimate disagreements about beliefs or practices that are more secondary in nature: What does baptism mean and who should be baptized? How should believers structure their local churches? Who should fill leadership roles? How often should the faithful practice Holy Communion? How should Christians interpret certain passages of Scripture?

Rather than fighting over the differences continually in a stalemate, Christian denominations organized so that they could live out their Christian faith with a clear conscience of what they believed to be best. One historian noted how the First Amendment of the United States’ Bill of Rights respects these differences by guaranteeing the freedom of religion: “... the object of the First Amendment was to prevent the national government from choosing one Christian sect [denomination] over another and establishing a single national denomination.”

With many different expressions of Christianity, there is one Holy Bible that is considered to be sacred by all Christians, both the Old Testament and New Testament. American Bible Society (ABS, operator of the .BIBLE Registry) serves as an interconfessional ministry organization that works with all denominations that honor the Scriptures, spanning the major branches of Christianity: Protestants, Catholic, and Orthodox. This is described in the 2013 Stewardship Report from ABS:

God’s Word is the solid rock upon which the Church stands. American Bible Society is passionate about helping the Church in America stay true to its foundation. To that end, we maintain strong church networks and reach leaders with Bible resources and engagement programs. In doing so, we strengthen the role God’s Word plays among millions of Christians of all denominations. Our interconfessional reach ensures that all have the opportunity to experience the Bible’s life-changing message.

For a more detailed look at the history of major denominations and to begin making sense of their respective biblical applications, see the website at A Study of Denominations (astudyofdenominations.com) by Ethan Longhenry.

A number of books and websites survey the historical events for the forming of denominations. What if there was a resource website where the verses of the Bible was linked with commentaries for how different interpretations and applications were made? Instead of looking at a family tree or a historical timeline, let’s see the Bible presented first. Wouldn’t that be a useful resource?