The most creative ideas for evangelism on the Internet have yet to be thought of or imagined. One of the most creative online outreaches was run recently for an American holiday by an Australian named Pete Chapman.

Pete Chapman posted his evangelistic project “One Million Bible Verses for Independence Day” on Kickstarter (a crowd-funding website) and it was fully-funded in 18 days.

The project idea was simple yet profound. 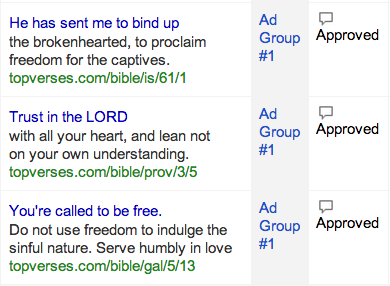 This one-week project presented Bible verses through Google AdWords. Instead of showing a text ad to entice a click-through to a web page, show the Bible verse right there in the text ad itself! The project was run during the week leading up to Independence Day and planned to post one million Bible verses on web pages using Internet advertising.

My view is that God’s word should be as accessible and engaging as anything else on the web. Several years ago I founded the topverses.com website which now helps thousands of people every day to find well known Bible verses. … For several months I have been trialling different ways to share Bible verses using internet advertising. I’ve been successful in obtaining approval from the networks to publish Bible based advertisements, and have also developed a sophisticated reporting system based on statistics received back from the networks. Here is an extract showing global distribution for nearly 70,000 Bible verse ads.

The project’s 38 backers not only contributed financially, they also helped to choose the Bible verses that would be displayed!

The project’s updates blog reported the campaign progress as it happened. And after July 4th, 2014, “… over 1.25 million Bible verses have now been shown in text ads on web pages related to Independence Day in more than 200 countries. Nearly 5,000 people clicked on the verses to see an Independence Day message.” [emphasis added] 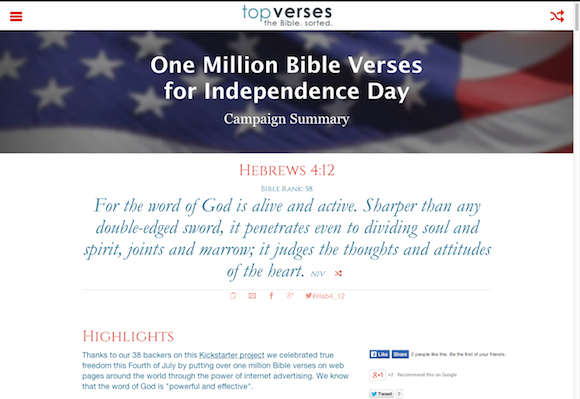 Pete reported on the campaign results and provided thorough analysis with nice visual charts at topverses.com/kickstarter.html. Pete had launched the TopVerses.com website in 2007 to make it easier to find popular Bible verses; and it’s not editorially selected, but rankings are actually calculated based on searches and views. TopVerses.com currently reaches thousands of people every day.

As technologies continue to develop and evolve, one of the primary goes with the .BIBLE TLD (top-level domain) is to encourage innovation in Bible engagement. With the Internet name space expansion program continuing to roll out this year and the next, there will be many new opportunities and possibilities for domain names to better engage with people around the world.

What opportunities could you imagine in the Internet of the future? What other creative ideas have sparked in your imagination from the above real-life example?