Which Bible version is used at Disneyland’s Candlelight?

Candlelight at Disneyland, officially known as the Disneyland Candlelight Ceremony and Processional, is an annual holiday tradition that dates back to 1958.

What started out as a small group of carolers and the reading of the Christmas story about the birth of Jesus Christ has expanded over the years to becoming a full production with a mass choir of more than 700 voices, orchestra, soloists, bell choir, fanfare trumpets, pageantry, with a celebrity narrator reading the Christmas story about Christ’s birth directly from the Bible. The Scriptures read were taken from Luke 2, Matthew 2, and Isaiah 9, nicely coordinated to fit in between the hymns sung by the choir. 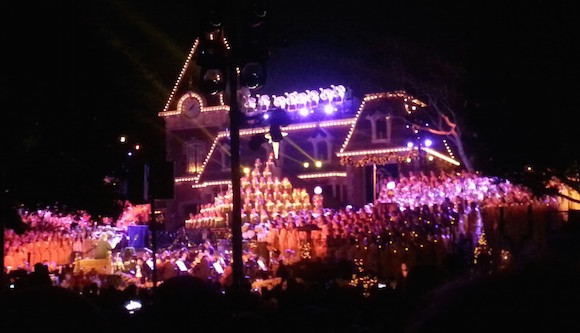 What a most wonderful surprise for my wife and I—we happened to be at Disneyland this past weekend (to attend our son’s last marching band procession through Main Street). As we were about to leave, we heard traditional Christmas hymns and organ music over the PA system and happily sung along. We were able to get in line for the standing room only section of the 2nd evening performance, as limited seating was reserved for invited guests. Wow, what an amazingly inspirational time! Yes, there it was, on the grounds of Disneyland by Town Square, the public reading of Scripture. On that evening, the Scriptures were read by celebrity narrator Beau Bridges and the Bible version being read from was the New King James Version, as I looked up the passages in a recorded video after I got home in the afterglow.

“Until I come, devote yourself to the public reading of Scripture, to exhortation, to teaching.” (English Standard Version)

“Until I come, devote yourself to the public reading of Scripture, to preaching and to teaching. (New International Version)

“Till I come, give attention to reading, to exhortation, to doctrine.” (New King James Version)

Across the country in Orlando, Florida, at Epcot theme park in Walt Disney World Resort, there’s an indoor version of the Candlelight Processional program that runs throughout the holiday season. According to a 2013 article in The Blaze, another version of the Bible was used there:

If you know someone who had been at a Disneyland Candlelight prior to 1982, would you ask him or her if they remember what Bible version was used? There are Disney fans out there who’d be curious to find out!