Why Non-Christians Read and Study the Bible as Literature

The importance and influence of the Holy Bible has broadly affected all humanity throughout its history, going far beyond its value to its devoted Christian followers and believers. The Bible is hugely influential in the shaping of Western civilization and English literature, to name a few. Isn’t it remarkable that people from all kinds of religions, and non-religions, have a healthy respect for the Bible.

Richard Dawkins is a noted atheist and public intellectual. He’s known for his criticism of creationism and intelligent design in his most popular book, The God Delusion, published in 2006. Yet he acknowledged the importance and value of the Bible for today’s culture. Read this excerpt from his article, “Why I want all our children to read the King James Bible: The good book should be read as a great work of literature” (The Guardian, May 2012)—

The whole King James Bible is littered with literary allusions, almost as many as Shakespeare (to quote that distinguished authority Anon, the trouble with Hamlet is it’s so full of clichées). In The God Delusion I have a section called “Religious education as a part of literary culture” in which I list 129 biblical phrases which any cultivated English speaker will instantly recognise and many use without knowing their provenance: the salt of the earth; go the extra mile; I wash my hands of it; filthy lucre; through a glass darkly; wolf in sheep’s clothing; hide your light under a bushel; no peace for the wicked; how are the mighty fallen.

The Bible’s importance for one’s education is also noted in this article titled, The Bible As Literature (CBS News, April 2006)—

“I think for any educated person, it’s absolutely essential to know something about the Bible. Whether a person is a believer or not, the Bible stands at the foundation of our form of civilization,” said Bart Ehrman, a University of North Carolina professor and Biblical scholar. 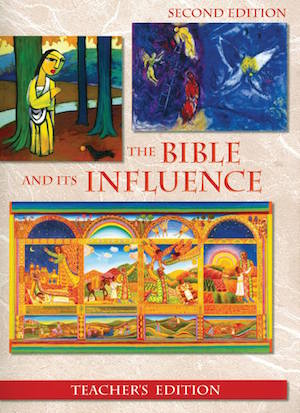 At world-renowned universities like Yale (ENGL 395/LITR 154/HUMS165) and Massachusetts Institute of Technology (MIT OpenCourseWare 21L.458), college-level courses are offered that give attention to the Bible as literature and its influence in later narrative, philosophic, and artistic traditions.

There’s also a textbook titled The Bible and Its Influence that supports the academic study of the Bible from Genesis to Revelation in over 600 high schools in 43 states, according to the Bible Literacy Project. Ths textbook is part of a program that has a clear intent for education: “The program was designed to address the fact that, without an understanding of the Bible, today’s youth cannot fully understand literature, art, history, music or culture.”

And there’s even a podcast, aptly named The Bible as Literature, on which Dr. Richard Benton and Fr. Marc Boulos discuss the content of the Bible as literature.

You don’t have to be religious or spiritual to find incredible value in the Bible as a great work of literature that gives profound insights into our human condition and has greatly influenced and shaped many cultures in the world today.